This totally realistic pen comes with 8 hilarious quotes from the man himself including classics such as.

“We will have so much winning if I get elected, that you may get bored with winning.”

This pen really is a real deal and genuinely sounds like Donald Trump.  So get it now!

Own your very own Donald Trump talking pen. In Donald Trump’s Actual Voice it says “You’re Fired” – Put “The Donald” To Work For You -it makes a Funny Office Prank or Christmas gift. 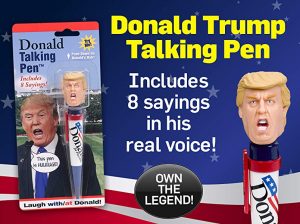 This highly collectible Donald Trump Talking Pen features a beautifully sculpted head that captures “The Donald” in all his glory. The pen says 8 different lines in Trump’s real voice:

2. “We will have so much winning if I get elected, that you may get bored with winning.”

3. “I will build a great, great wall on our southern border. And I will have Mexico pay for that wall.”

5. “I will be the greatest President that God ever created.”

7. “I love China. I just sold an apartment for fifteen million dollars to somebody from China.”

When you play this hilarious Donald Trump Talking Pen for friends and family, you’ll be the center of attention. Just like Donald! Simply press down on his famous hair and he’ll tell you exactly how to make America great again!

You’ll be totally blown away by this high quality donald trump taking pen and its amazing sound quality of this pen! An awesome collectable gift for the politically minded.

There are no reviews yet.